Anybody reading Dumbarton’s pre-match team news ahead of this game would have wondered how many mirrors had been broken recently.

Three recognised strikers out injured, one suspended. None of them to speak of available to lead the line on the hazardous trip to Annan Athletic.

One which simply had to be won. The time for living off the seven wins at the start of the season was over and a new run had to be started.

It was not going to be as full a package as we saw against the same opposition at home two months ago. Dumbarton just had to find the net more times than Annan could do it.

One such occasion was enough, Gregg Wylde doing it with a firm header three minutes into the second half.

By then, Sons had already survived the home side striking the woodwork twice, and had another such instance before the afternoon was out.

It owed a bit to fortune. But it owed more to hard work, digging in and putting up a resistance when it needed to be put up. And of course, to Wylde’s fine finish.

Annan’s first assault on the frame of the visiting goal came on nine minutes, Tony Wallace heading against the bar from a corner which caused a scramble in front of goal.

Dumbarton responded impressively, Ross MacLean sending over a ball that Finlay Gray tried to finish acrobatically, but his finish was pushed wide at close range.

Not much was happening for either side in front of goal after that, but close to half time, another close call for Sons.

Tommy Muir’s effort struck the crossbar for Annan, and Dumbarton headed inside relieved that their clean sheet was intact.

And that proved even more important on 48 minutes. After a spell of possession around the Annan box, Kalvin Orsi sent the ball over, and Wylde was waiting to score with a looping header.

The home side enjoyed far more of the ball than their visitors, but not for the first time, the defensive side of the Sons team showed it could be relied upon.

With seven minutes left, victory was nearly sealed. David Wilson showed good awareness to play in Michael Garrity, but the Morton loanee’s touch was too heavy and the ball ran away from him.

Annan were now throwing everything forward and the destiny of the points just crept into some doubt in the final minutes.

After substitute Dominic Docherty’s effort whizzed across goal and wide, Aidan Smith’s effort went over after the crossbar guarded by Brett Long was hit for the third time.

More than one Sons player ended the afternoon grimacing after all the effort. But the league table, showing that they remain joint top of the division, eased any pain. Job done. 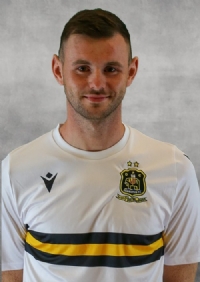 SONS CLAIM POINT AFTER OWN GOAL

Saturday 3rd December 2022 DUMBARTON have taken a 1-1 draw from a demanding game away to Bonnyrigg Rose today. There…